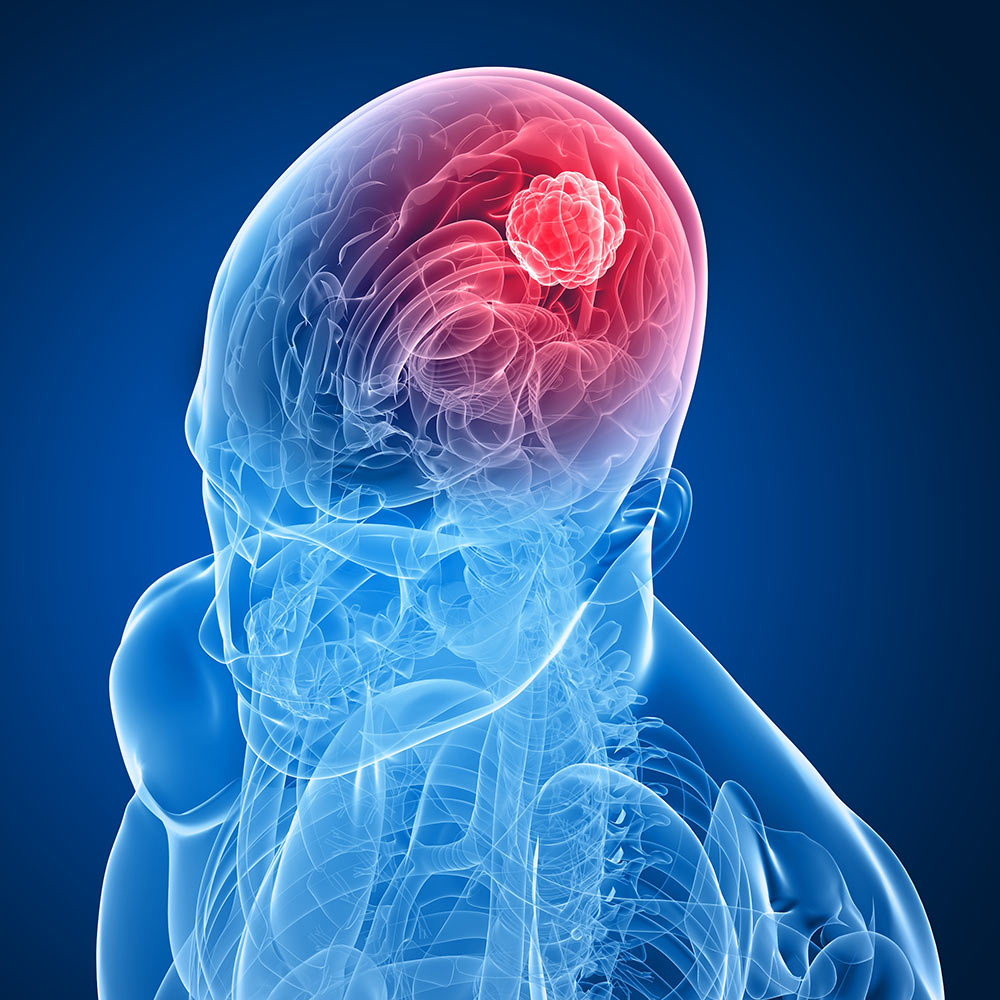 A brain tumor is a mass or growth of abnormal cells in your brain. Many different types of brain tumors exist. Some brain tumors are noncancerous (benign), and some brain tumors are cancerous (malignant). Brain tumors can begin in your brain (primary brain tumors), or cancer can begin in other parts of your body and spread to your brain (secondary, or metastatic, brain tumors).
Glioma is a type of tumor that occurs in the brain and spinal cord. Gliomas begin in the gluey supportive cells (glial cells) that surround nerve cells and help them function.Gliomas can affect your brain function and be life-threatening depending on their location and rate of growth.Gliomas are one of the most common types of primary brain tumors.The type of glioma you have helps determine your treatment and your prognosis. In case a brain tumor is suspected by the doctor, they ask the patients to do the brain scanning tests.This includes a CT scan or an MRI scan or both.If the brain scan report suggests a brain tumor, then a biopsy is performed for diagnosis.In general, glioma treatment options include surgery, radiation therapy, chemotherapy, targeted therapy and experimental clinical trials.
Symptoms of a glioma have a lot of similarity to the ones produced by other malignant brain tumors and mainly depend on the area of the brain affected.About half of total brain tumor patients, suffer from headache.Other symptoms of glioma include loss of memory, physical weakness, loss of muscle control,language problem,visual symptoms, personality changes, cognitive decline. These symptoms may change according to the part of the brain affected.
Like most primary brain tumors, the exact cause of gliomas is not known. But there are some factors that may increase your risk of a brain tumor. I want to give some examples ; Your age. Around 75% are diagnosed children and young adults under the age of twenty, but have been known to affected older adults as well.And other example is ; Exposure to radiation. People who have been exposed to a type of radiation called ionizing radiation have an increased risk of brain tumor. Examples of ionizing radiation include radiation therapy used to treat cancer and radiation exposure caused by atomic bombs.Last one example is ; Family history of glioma. It’s rare for glioma to run in families. But having a family history of glioma can double the risk of developing it. Some genes have been weakly associated with glioma, but more study is needed to confirm the link between these genetic variations and brain tumors.Actually there are a lot examples about the risks of brain tumor but I give these examples for understand.
It is hard to organise and run trials for rare cancers. Getting enough patients is critical to the success of a trial. The results won’t be strong enough to prove that one type of treatment is better than another if the trial is too small. Gliomas are named based on the specific type of glioma, or brain cell, affected.So there are 3 types of gliomas, astrocytomas, oligodendrogliomas, and ependymomas. Ependymomas make up less than 2% of all brain tumors and less than 10% of all brain tumors in children. These tumors come from the ependymal cells and because they do not spread into the normal brain tissue, some ependymomas can be cured by surgery. They rarely spread outside the brain. But they do have a high risk of local recurrence and thus are considered malignant. Astrocytomas start in brain cells called astrocytes. Most of these brain tumors cannot be cured because they spread all through the normal brain tissue. Astrocytomas are usually classified based on on criteria used by a doctor examining the biopsy under a microscope. Tumors that are grade 1 grow the slowest, while grade 4 tumors, the highest grade, are the fastest growing.Oligodendrogliomas are tumors that spread in a similar manner to astrocytomas. Some of these tumors may be slow growing but still spread into nearby tissue. Sometimes they can be cured. A higher grade anaplastic oligodendroglioma grows and spreads more quickly and usually can’t be cured.
Our brains control every aspect of who we are, what we think and feel. Brain tumors can sometimes cause personality changes such as confusion, anxiety or mood swings. If you have or had a brain tumour, you may experience changes to aspects of your personality. Personality changes may include irritability or aggression , disinhibition – loss of inhibitions or restraints and behaving in socially or culturally unacceptable ways, confusion and forgetfulness, apathy (lack of interest and motivation), depression,anxiety and so far.
As a brain tumour grows, it puts pressure on surrounding tissue affecting the function, process or part of the body that is controlled by that area of the brain. Personality changes are most common in people when the tumour is located in their frontal lobe, which controls personality, behaviour and emotions, problem solving and long-term memory. Personality changes can also be caused by a tumour in the putuitary gland which controls hormone levels.